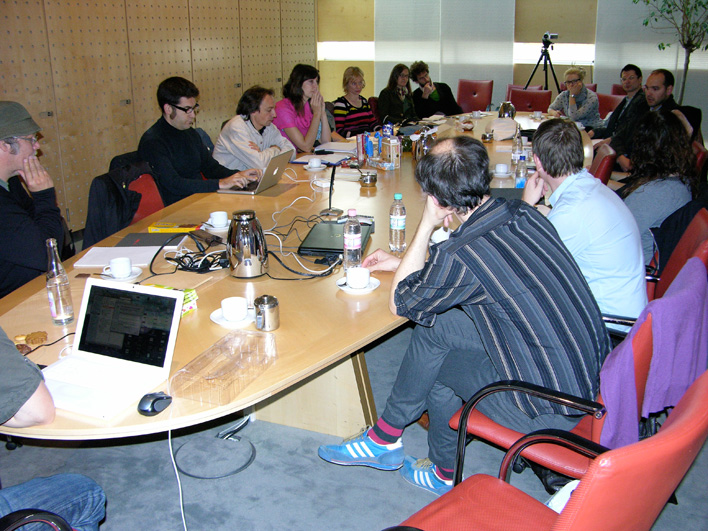 AIM Berlin 2010 was held at the Swedish Embassy in Berlin with nineteen participants from ten organisations. Initially the situation of the artist-run activities in the different countries were presented and compared, as well as the relationship to the rest of the art scene and the audience. A series of problems and possible solutions was identified, followed by discussion regarding the possibility of creating common platforms. The AIM Network was formally established, and its long-term goals concerning exchange, collaboration, mobility, visibility and accessibility were formulated on the basis of the preceding discussions.

AIM Meetings over the years

On 18–20 September AIM Network's members took part in a planning meeting in Riga, Latvia. The meeting contained discussions on the future activities and programme development of the network in line with the planned application for Creative Europe' Read more...

Poland has a long tradition of grassroots initiatives, although most of them are characterised by ephemerality. Artists increasingly Read more...

Three panel discussions were organised at Supermarket Talks, which this year was held in Svarta Huset at Telefonplan, Stockholm.

AIM organised three panel discussions at Supermarket Talks, which this year was held at Konstfack: University College of Arts, Crafts and Design, next to Svarta Huset – the new location for Supermarket 2015.

AIM Riga, September 2014 was held at Totaldobze, Press House, Riga, with seven participants from five partner organisations. The meeting was preceded by a three-day workshop at Tasu Manor, Grobina in Latvia’s countryside, which was directed toward Read more...

AIM Athens 2014 was at Art-Athina in the Taekwondo Stadium, Athens, with thirteen participants from nine partner organisations. For the second year Art-Athina ran ‘Platforms Project @ Art-Athina’ (a section for artist-run spaces and artists’ group Read more...

AIM organised two panel discussions at Supermarket Talks, once again, as in the previous year, held in Studio 3 at Kulturhuset. First of the discussions was ‘Life Beyond the Budget – a panel discussion about alternative financial strategies’, with Read more...

AIM Helsinki 2013 was held at the Business Meeting Park Kamppi, with eleven participants from seven partner organisations. Included were visits and meetings with representatives from Huuto Gallery, Gallery Forum Box and MUU Gallery, where the part Read more...

Supermarket Talks were held in Studio 3 at Kulturhuset. The seminar started with Andreas Rib Read more...

AIM Mallorca 2012 was hosted at Can Gelabert in Binissalem, Mallorca with ten participants from five partner organisations, as well as Alvaro Campo from the Nordic Art Association. Based on the idea of creating a web portal and database/CMS for ar Read more...

AIM Stockholm 2011 was organised at Kulturhuset in Stockholm in conjunction with Supermarket 2011 – Stockholm Independent Art Fair, and with fifteen participants from seven partner organisations. During this meeting the network discussed ways in w Read more...

AIM Berlin 2010 was held at the Swedish Embassy in Berlin with nineteen participants from ten organisations. Initially the situation of the artist-run activities in the different countries were presented and compared, as well as the relationship t Read more...